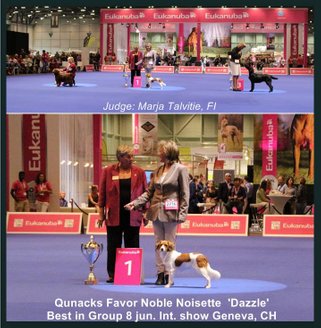 We are very, very proud that we were able to add Dazzle as new familymember to our kennel in november 2012.

Dazzle is named after her great grandmother. One of the reasons why we got interested in her lines. She has beautiful ancesters and the Qunacks Favor Kennel in Hollands breeds with the type we looked after. Also a few decades of experience with the Kooikerbreed, choosing the best quality combined with the best health and very social dogs.

We thought it was important to import more/new lines in Scandinavia. Dazzle has 4 sisters and 2 brothers. 4 breeders from other countries were able to get a puppy from this litter. 1 Brother went to Poland, 1 sister to Denmark, 1 sister to Norway and Dazzle in Sweden. Dazzle is a social, typical kooiker and loves to cuddle on the sofa with you. She's very succesfull in the showring, like most of her brother and sisters.

Dazzle has won best female at 6 kooikerspecials, BIS at swedish clubshow 2016 and even Best in Show at the biggest kooikerevent in the World: the clubmatch in Holland. Only breedspecialists involved.

She became champion in 4 countries just 2 years old and has earned over 34 titles.